Spotted at The Guardian this morning…Ruud van Empel, from the Netherlands. Many of the children in your works are black. How did this choice come about? I grew up in […]

Spotted at The Guardian this morning…Ruud van Empel, from the Netherlands. 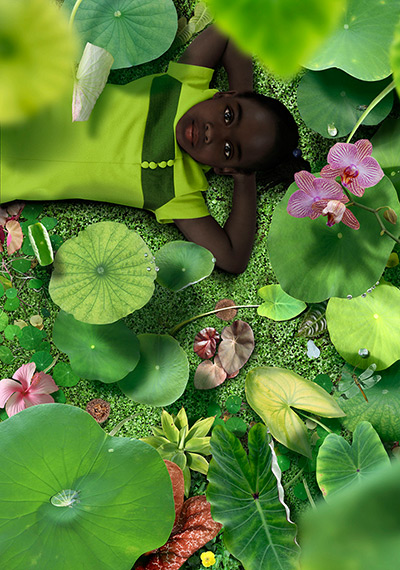 Many of the children in your works are black. How did this choice come about?

I grew up in a small Catholic town in the south of the Netherlands. There was only one black boy in my primary school class. In the portrait Generation 1 I expressed this situation. It shows a white class with just one black pupil. With World#1 I decided to work with more black children. It set off a whole new series of work. First I thought of portraying a girl in a dirty, old and torn-up dress, as if she were very poor. I suppose this idea popped up in my head because of the image we westerners are often given. I didn’t really like that idea though, and decided to give them the clothes my generation wore when we were kids, especially because those clothes looked very innocent to me. Later, in 2007, the art historian Jan Baptist Bedaux told me this was the first time a black kid was portrayed as a symbol for innocence in western art. He wrote:

The fact that many of the children in his compositions have a dark skin is a facet that cannot remain without comment. Although it is self-evident that a child’s skin colour is not important, the iconography of the innocent child was traditionally represented by ‘white’ children. The earliest examples of this date from the early 17th century. These are portraits in which children are captured in an idealised, pastoral setting. It is a genre to which the children’s portraits of the German artist Otto Dix, a source of inspiration to Van Empel, refer. In deviating from the standard iconography by giving the child a dark skin, Van Empel inadvertently assumes a political stance. After all, this child is still the focus of discrimination and its innocence is not recognised by everyone as being self-evident.